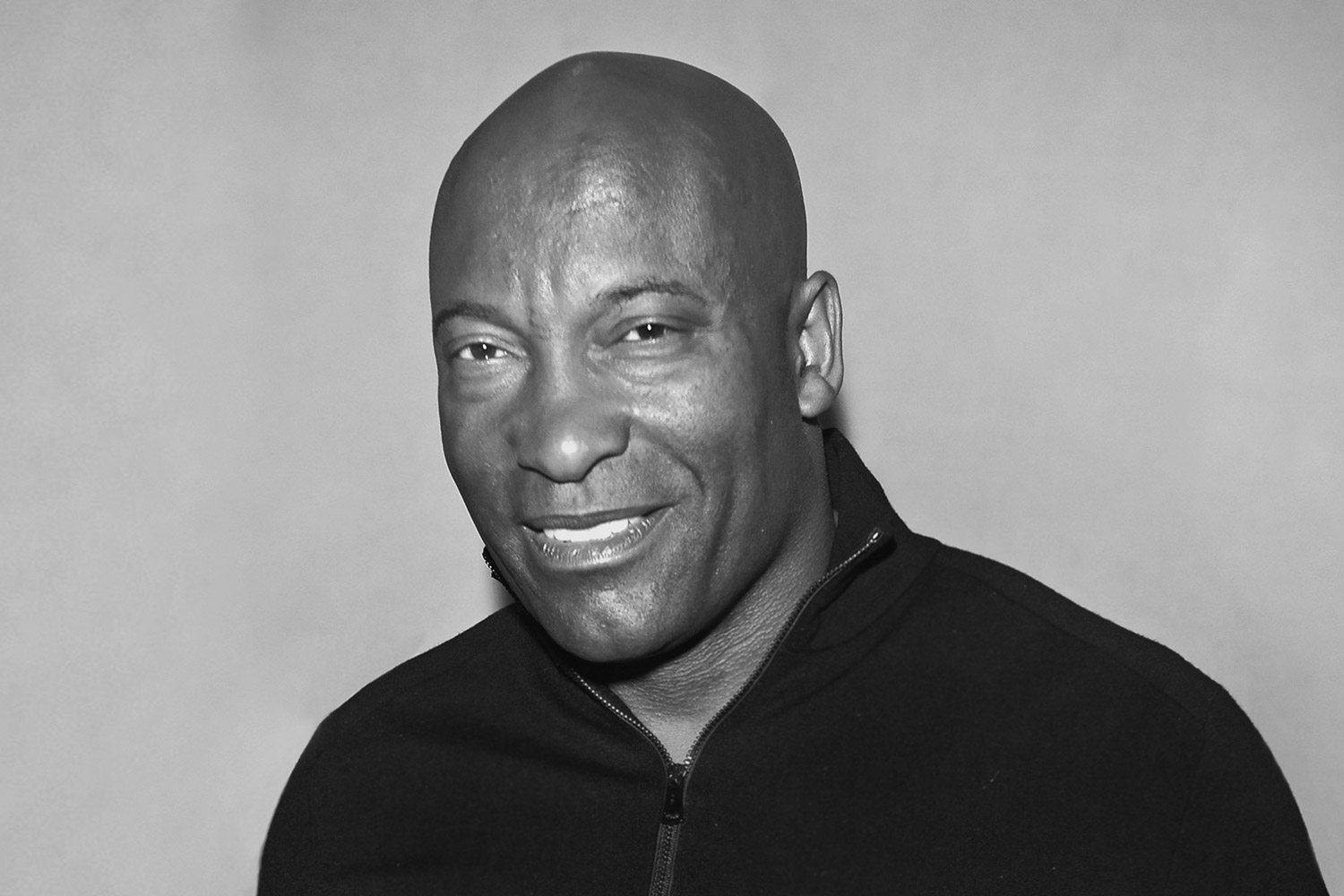 Los Angeles, California — Director John Singleton died Monday at Cedars-Sinai Medical Center, following complications resulting from a stroke and removal from life support, according to a statement released by his family. The award-winning filmmaker transitioned peacefully, surrounded by family and friends. He was 51.

“This was an agonizing decision, one that our family made, over a number of days, with the careful counsel of John’s doctors.”

Singleton reportedly began to experience weakness in his legs shortly after returning to the United States from a trip to Costa Rica, suffered a major stroke on April 17, and on April 25, news sources learned he was in a coma.

Why John Called Himself the ‘First Black Film Brat’

While much is and will be made of Singleton’s cinematic achievements for years to come, John himself said in a 2016 interview with Jacqueline Stewart for the Television Academy Foundation, that his greatest achievement is: “I’ve been in the entertainment business more than 26 years and I haven’t lost my soul.”

“I call myself the first black film brat because Spike (Lee) did so much opening of doors, Gordon Parks and all those people, that when I came along? Everybody was looking for an alternative, which was me,” Singleton continued.”I came in made my first movie and was like, ‘I’m not going to take no s***, I’m going to do what the f*** I want to do (laughs)’—and I had fun.”

Born January 6, 1968, in Los Angeles, trailblazer Singleton graduated from the University of Southern California School of Cinematic Arts in 1990 and ushered in a fresh film genre with pivotal inner city drama Boyz N the Hood in 1991—an idea based on his own upbringing, which he had shared on his USC film school application.

His Journey Made Careers, Set Records

While Boyz was Bassett’s first major role, the drama was the first film ever for Chestnut, recent Oscar winner Regina King, and recording star-actor-filmmaker Ice Cube.

“A lot of people would not be working if it wasn’t for him,” D.L. Hughley observed.

The Singleton family said in a statement today that John loved nothing more than giving opportunities to new talent and noted that his films are packed with career-making roles for such actors whom the industry would come to embrace as Tupac Shakur, Terrence Howard, Tyrese, Taraji P. Henson, in addition to the stars of Boyz N the Hood.

With Boyz, Singleton became the first African American to be nominated for an Oscar for Best Director (Barry Jenkins, Jordan Peele, Lee Daniels, Spike Lee and British filmmaker Steve McQueen have since been nominated) and also the youngest ever in the category—a record that still stands today—at 24 years old.

The United States Library of Congress selected Boyz N the Hood for preservation in the National Film Registry in 2002, citing its cultural significance and formalizing its status as a American classic.

He went on to direct Tupac Shakur and Janet Jackson in Poetic Justice in 1993, groundbreaking music video “Remember the Time” for Michael Jackson (a visual feast featuring Eddie Murphy, Iman, Magic Johnson, Tommy “Tiny” Lester, and choreographed by Fatima Robinson), Higher Learning (1995), Rosewood (1997), the Shaft redux in 2000 (in a nod to one of his heroes Gordon Parks), Baby Boy in 2001, 2 Fast 2 Furious (2003), and Four Brothers in 2005, among other titles. Singleton also served as a producer for the acclaimed Hustle & Flow and Black Snake Moan.

More recently, as more superstar actors and filmmakers migrated across television and digital platforms, Singleton made his mark in these spaces as well.

He co-created FX series Snowfall, which is set in Singleton’s beloved South Central Los Angeles and chronicles the 1980s crack cocaine epidemic. He directed episodes of Emmy-winning miniseries The People v. O. J. Simpson: American Crime Story, hit Fox series Empire, and fan favorite Billions. Plus, the Los Angeles native continued to speak up about the importance of African Americans having meaningful storytelling work in front of and behind the camera.

This is where it all started. The Genesis – The Genius – The Genre Maker/Star Maker (Taraji P. Henson, Ice Cube, Tyrese Gibson, Lawrence Fishburne, Regina King,Nia Long, Angela Basset, Cuba Gooding, Jr. – in no particular order as these are all great actors/actresses). John Singleton gave me a chance. When I left the audition for “Boyz N’ The Hood” as he shook my hand, he gave me a stronger grip than normal and looked me in the eye. I felt he was basically giving me a signal that I had the job without telling me. From there, there was no comprehension of the massive chain of events that was about to follow. People from all over the world literally tell me how they’re affected by Boyz ‘N The Hood. The magnitude and world-wide impact that his ground-breaking film would have for society cannot be measured. Helping to bring awareness of what it takes to come to maturity as a black male in the ‘Hood, or die trying… Helping to gain a deeper understanding of the challenges faced. Dealing with challenges and adversity in life and in general. From that lesson, for anyone who watches Boyz N’ The Hood, we are able to learn a little more about ourselves and each other. Hopefully, we are able to grow, evolve and gain a deeper love and understanding of our humanity. John Singleton, thank you for your vision. Thank you for holding my hand a little stronger. Thank you for connecting with me and thank you for connecting me to history. Thank you for connecting and transcending generations, nationalities, nations, races, communities, societies. Thank you, John Singleton, for connecting us all. #RIP #JohnSingleton

There aren’t many of us out here doing this. It’s a small tribe in the grand scheme of things. He was a giant among us. Kind. Committed. And immensely talented. His films broke ground. His films mattered. He will be missed. And long remembered. Thank you, John. #RunIntoHisArms

Saluting #JohnSingleton: It is crazy how life isn’t guaranteed. At 51, John Singleton had been a young man of substantial wealth and who stayed in good health. We all will have our day but it’s more about the impact you have made when you leave this place that allows your legacy to be everlasting. Spike inspired John Singleton, John Singleton inspired Coogler…they inspired all of us. So lesson learned don’t wait for that day that’s not promised because dreams have expiration dates and they are not printed. Inspire and live well. #RIPJohnSingleton you did your thing, so let us all pick up the torch and keep doing it.–JF, BlackTreeTV/HollywoodPost.com

A Love for Sailing, A Struggle with High Blood Pressure

When Singleton was not on set, he indulged his love for the sea—sailing the Pacific coast in his boat, J’s Dream. Plus, John could be found most mornings kayaking in Marina del Rey.

“I spend a lot of time sailing,” he shared in his Academy interview. “Fifteen hundred miles offshore, that’s where you learn stuff. You’re at the mercy of the elements. You get close to God. It’s the same as directing: There’s a certain amount that you have that’s in your control, and there’s a certain amount that’s not in your control—but you’re able to try to guide and navigate the whole thing.”

John Singleton is survived by his mother, Sheila Ward; his father, Danny Singleton; and his children, Justice, Maasai, Hadar, Cleopatra, Selenesol, Isis, and Seven. Sharing Singleton’s struggle with high-blood pressure, his family is encourages everyone to learn more about the condition:

Like many African Americans, Singleton quietly struggled with hypertension. More than 40% of African American men and women have high blood pressure, which also develops earlier in life and is usually more severe. His family wants to share the message with all to please recognize the symptoms by going to Heart.org.

We are grateful to his fans, friends and colleagues for the outpour of love and prayers during this incredibly difficult time. We want to thank all the doctors at Cedars Sinai for the impeccable care he received.

Hiroyuki Sanada joins the MCU at the Avengers: Endgame